BOWLER is a system-neutral horror adventure. Events are set in a region known as The Upper Hearth, a cavity of autumnal wilderness, comprised of dark forests and jagged plateaus. Nestled within, the remote village of Nellthorp, where gas lamps burn bright to stave off things that creep at night.

Adventurers are often average people who end up in perilous situations, brave souls willing to take on dangerous work for good pay. Magic exists, but has long since gone out of style.

The Village of Nellthorp
Tucked away from the modern world, the recluse villagers of Nellthorp live their lives. In the shadows, petty rivalries, selfish desires, and cut throat sacrifices are all waiting to play out.

Sodden Ghoul Farm
When crops would no longer grow in The Upper Hearth, the family at Moorland Farmstead resorted to forbidden practices extracted from the pages of a stolen tome. Using means both scientific and arcane, they attempted to reanimate their perished livestock. Things went wrong.

Incubating Demon Swarm
A century ago, a greedy venture carried out at Deeds’ Mine exposed a vast chamber underneath The Upper Hearth. The act allowed an ancient evil to seep through, poisoning the land and all the people who live there.

The Rise of Bo’lor
Deep in the southern gorge, Bo’lor sleeps. The massive, alien being uses its spawn to infiltrate the minds of those within Nellthorp Village, and bend them to their will. Margrethe Eloi, The Chosen of Bo’lor, exploits her position as priest of Stone Church, to lure sacrifices and acquire new servants, to ensure her master’s rise. Communion draws nigh.

WHAT'S IN THE BOOK?

WHAT'S NOT IN THE BOOK?

This is a system-neutral adventure. While some suggestions are provided, the book does not include specific rules, character generation, or stats of any kind. Pick your favorite system and borrow from there.

Overworld (The Upper Hearth) submitted to:
Vexes and Hexes Jam

Underworld (The Underneath) submitted to:
Adventure Jam 2

Check out all the other amazing submissions, support indie creators!

I really liked the format of this one - More than enough detail to run as written, but enough skeleton to stretch your own additions across.

Thanks! Appreciate you taking the time to have a look. :] 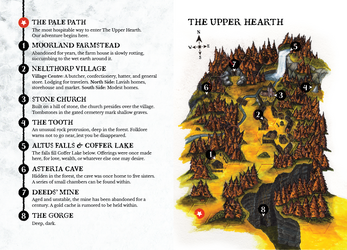 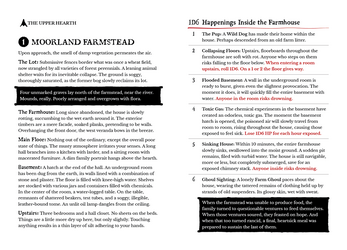 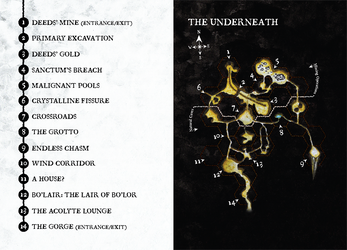 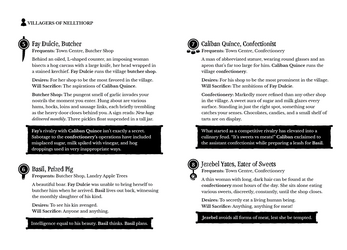 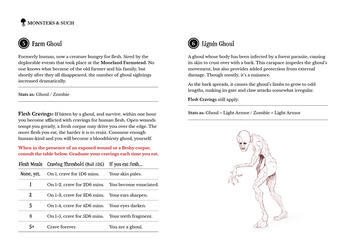